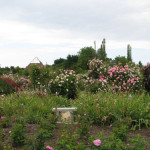 In 2005, Gary and Georgina Campbell bought the property now known as ‘Cheops’; an organic Feijoa Orchard with a perfect place for a large garden.  Many of the plants arrived by truck from their old farm, having been collected for over 20 years by Georgina, to create the garden which was begun in June 2005.  The Hawke’s Bay climate and soils have helped the plants to thrive.  Many plants are propagated on site to fill the beds but also because no … END_OF_DOCUMENT_TOKEN_TO_BE_REPLACED

The latest issue of the Weekend Gardener magazine features Hawkes Bay gardener Georgina Campbell and her thoughts on growing roses organically without the use of sprays. Her garden features over 2000 varieties of all types interplanted with other flowering plants. In the last two years, Georgina has been establishing a collection of roses from the McGredy rose breeding dynasty, including Dr Sam McGredy who moved to New Zealand from Ireland in … END_OF_DOCUMENT_TOKEN_TO_BE_REPLACED