Established in 1969 as a partnership between the New Zealand Rose Society (Inc) and the Palmerston North City Council, the trial grounds were the first such trial grounds to be established in the southern hemisphere. See the 2021 winners here

View results and photos of previous winners by clicking on the links below:

The trial grounds are located within the Dugald Mackenzie Rose Gardens, which form part of the Victoria Esplanade Gardens in Palmerston North, which was chosen to host the trials because of its central location, good growing conditions for roses and support from the local rose society and city council.

The main objective of the trials is to test roses from breeders in New Zealand and overseas under standard conditions that have not been commercially sold here before. Each trial last for two years with 30 – 50 in each trial, including many from New Zealand breeders.

Entering cultivars into the trials is free but the cost of sending plants is the responsibility of the entrant. Six plants are required for Hybrid Teas and Floribundas, four for miniature/patio cultivars, three shrub/groundcover and two for climbers or patio climbers.

Each trial is assessed by a panel of judges drawn from local rose societies around Palmerston North, no information about the cultivar is revealed to the judges with each entry only identified by a code number. A simple 1 – 10 scoring system is used to assess each entry under the categories of plant quality, freedom of flowering, health, flower quality, flower form and fragrance.

The roses receive an average level of care whilst under trial – they are not pampered but are not neglected at the same time. In the first year, assessments occur three times over the growing season in spring, summer and autumn; and four in the second year about every six weeks during the growing season. Novelty is assessed separately by a panel of five who are looking for something completely different from any other rose grown in New Zealand. 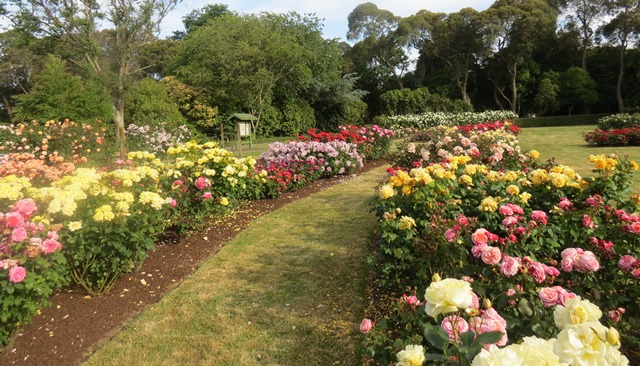 To gain an award, a rose needs to reach 70% of the points allocated by the judges, although awards are declined if the entry won’t be commercially released in New Zealand.

Certificates of Merit are presented to those roses gaining 70 points or more with special awards for fragrance and novelty being made if a rose has scored high marks from the judges.

For the highest pointed NZ bred rose by an amateur breeder, the Silver Star of the City of Palmerston North is awarded. A positive trend in recent years has been an increase in the number of New Zealand bred roses winning awards; such roses have included Millennium, Blackberry Nip, Chocolate Prince and Southern Beauty.

The highest award of the trials is the Gold Star of the South Pacific which is presented to the rose gaining the highest pointed on trial. It is a sought after award with many past winners going on to be very popular commercially in New Zealand. Such roses have included Friesia, Margaret Merrill, Sexy Rexy, Gold Medal, Hot Chocolate, Anniversary, Serendipity, Racy Lady, Pacific Glory, Absolutely Fabulous and Red Flame.