You are here: Home / Persica Roses

One such group of roses that has created much interest over recent years mostly for their novelty appeal are the Persica or Hulthemia roses. They feature blooms with a distinctive ‘eye’ that sets them apart from other roses.

These types of roses are actually not new, but are a good example of what can result from many years of breeding with them. Their origins trace back to Hulthemia persica or Rosa persica, a subgenus of the Rosa family native to Iran, Afghanistan and Central Asia. The plant and flower are nothing special – a sprawly growing plant with few flowers at the best of times. They are different by having a brown blotch in the centre of the single yellow blooms.

The origins of the modern hybrids go back to the 1960’s when two well known rose breeders Jack Harkness from England and Alec Cocker from Scotland  were swaping ideas on rose breeding. They decided to use Hulthemia persica. Very little had been done breeding with this line previously so some seeds were obtained from Iran and both Jack and Alec set about breeding with Hulthemia persica.

There was very little to cheer about in the first few years with poor germination and few plants making it to the flowering stage.  However, in the late 1980’s four Hybrids were released by Harkness which created interest by other breeders in working with these roses.

One of these breeders was Chris Warner (of patio climber fame) who started his own line and in recent years several of these hybrids have reached the market here in New Zealand. The flowering is much better with a wider range of colours being offered and although the plants can struggle at times, they are much better than the early releases. 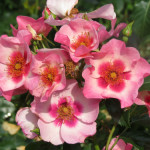 Bright as a Button

‘Bright as a Button’ is probably the best of the newer persicas so far in New Zealand, picking up the Nola Simpson Novelty Award at the NZRS Rose Trials in Palmerston North in 2013. The blooms are single pink with a darker eye and the plant is never without them.  This variety is also very healthy and has plenty of vigour and could almost be trained as a short climber in some situations.

‘Eye of the Tiger’ was released last year and is a stunning variety with yellow blooms and a striking red eye. It does fade out but is very eye catching. Also free flowering, this is a healthy grower with a spreading habit. 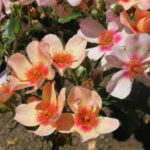 For Your Eyes Only

‘For Your Eyes Only’ was released this year and is a more subtle colour, apricot peach and pink with a dark pink eye. It is too early to see how this one performs but would be worthwhile growing.

Another English rose breeder Peter James created the larger flowering persica ‘Eyes for You’. This striking variety has blooms of pale lilac/cream with a dark purple eye and is fragrant too.

A number of other breeders around the world are now working with the Persica line and there should be a wider range of varieties coming on the market in the future. There are already varieties with more petals but the main problem is that the ‘eye’ is not as prominent as the single blooms. There should also be a wider range of colours and plant types become available. Wouldn’t it be great to have climbing varieties to cover a wall or fence and miniature/patio varieties for small gardens and containers? There will also be advances in plant health and freedom of flowering, problems that plagued early efforts in this area but largely overcome through many years of work and thousands of seedlings raised and ultimately discarded.