You are here: Home / Rose of the Month / November – Sally Holmes

For November, we feature the latest entrant into the Rose Hall of Fame as presented at the 16th World Rose Convention in South Africa last month.

Sally Holmes was a very deserved choice as selected by member countries of the World Federation of Rose Societies which shows how much it is grown and admired around the world. It is also the first rose in the Hall of Fame to be bred by an amateur rose breeder, Robert Holmes from England who named the rose for his wife.

In New Zealand, Sally Homes can be grown as a shrub or climber but however you grow it, it will not disappoint. Give it a bit of room in your garden or for impact, plant several bushes as a hedge or against a fence.

The blooms are creamy white in colour with sometimes a tinge of pink and apricot to the blooms. Mildly fragrant, the blooms are produced in large clusters and are single in form, which produce a great display all summer long. Sally Holmes is also exceptionally disease tolerant and has relatively few thorns – almost a gardeners delight.

Sally Holmes has always been popular in New Zealand. It is ranked the top shrub rose by members of the New Zealand Rose Society and is fourth in the list of most healthy roses.

A rose well worth growing in any garden and whose popularity will continue for many years. 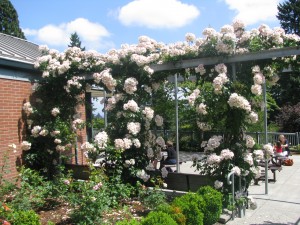