Welcome to 2017, let’s hope it is a great year with many beautiful roses and good weather. Hopefully not too much to ask for.

The last event for many rose enthusiasts and one that the results are keenly awaited for was the New Zealand Rose Society International Rose Trials winner’s presentation held in Palmerston North. The trials are run over two years with around 40 un-released roses in each one – many of these will never be released onto the New Zealand market so the trials are the one and only public opportunity for them to be put through their paces. A panel of rosarians from a variety of backgrounds judge the trials and assess each variety against criteria such as disease tolerance, habit and growth, freedom of flowering and fragrance. At the end of two years, the scores are tallied and the awards presented to those roses that have scored an average of 70% or more. 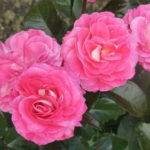 So what won in 2016? The overall winner which receives the Gold Star of the South Pacific was won by ‘Quintessential’ bred by Rob Somerfield of Glenavon Roses in Tauranga. This floribunda has blooms of pink with a white reverse, very free flowering and healthy, this will be one to look out for when released in the next couple of years. 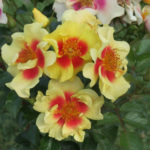 Eye of the Tiger

Novelty is something the judges always look for and if a rose scores high enough in this area, the Nola Simpson Novelty Award is presented. This doesn’t happen every year, in fact the novelty award has only been presented three times since 2000.  So it has to be good and different at the same time. This year’s winner was ‘Eye of the Tiger’ which is one of the Persica or Hulthemia roses with the prominent ‘eye’. ‘Eye of the Tiger’ has yellow blooms with a red ‘eye’ and is very striking. It is also super healthy and always has flowers on it. Bred in England by Chris Warner and available through Tasman Bay Roses, this is something a bit different to grow.

The final award, a Certificate of Merit went to a as yet unnamed variety code named ‘Mattliandup’ bred by Bob Matthews and entered by Matthews Nurseries. A strong, very healthy growing variety, it has pink blooms in clusters and is scented.

At the awards presentation was Matthias Meilland from the famous French rose breeding family of Meilland based at Antibes. Matthias is the sixth generation of his family to be involved in rose breeding and is the head of International Public relations. Matthias presented a lecture on the history of the Meilland family and its involvement across breeding roses for gardens, landscaping and cut flower roses. The most famous rose to come from the Meilland family is the world renown ‘Peace’ bred by Francis Meilland (Matthias grandfather) which must be the most widely grown rose of all time. Other Meilland roses grown in New Zealand are ‘Leonardo Da Vinci’, ‘Cameo Cream’, ‘Pretty Polly’ ‘Pierre de Ronsard’ and ‘Best Friend’

In the Rose Garden for January: