30 years ago, a rose was released that caused a bit of a stir in the world of roses because of its name.

This month we feature it as one of the best floribunda roses of all time and one that even those with a passing knowledge of roses even know about!

“How could they name a rose like that” was commonly heard at the time. We can only be talking about ‘Sexy Rexy’, one of the most popular floribunda roses and still widely grown around the world today. It’s reputation is also down to its sheer flower power with a mass of pale pink blooms being produced. It can be a bit slow to repeat but is a sight in full bloom. In the garden, it is a medium growing bushy plant that also is great grown as a standard. Generally trouble free, black spot can show up when conditions are right.

‘Sexy Rexy’ is named after an old friend of its breeder, our own SamMcGredy. The name was originally a nickname when it was being tested as a seedling and stuck. A multiple award winner around the world including the top award at the New Zealand Rose Society trials in Palmerston North in 1984. Bred from ‘Seaspray’ x ‘Dreaming’, its reputation has also been forged as a parent to many newer roses over the years and is a good rose to start breeding with, even though it can produce a lot of similar roses in the pink and white shades.

One worth growing and bound to be grown for a long time yet! 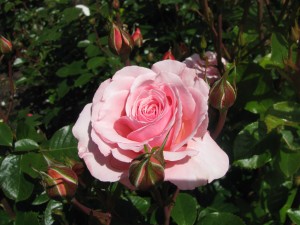