You are here: Home / Rose of the Month / June – Golden Future
Good yellow climbing roses are few and far between, but we have been lucky in the last few years to have two or three very good new ones come on the market in New Zealand.
One such rose is ‘Golden Future’ which is a strong growing climber with clusters of creamy yellow blooms produced all season long. There is also a good fragrance to be had if you take a closer smell. In the autumn and early winter, large hips are produced which creates added interest in the garden.
Perhaps the best feature of this rose is its exceptional disease tolerance. Some yellow roses can be a bit prone to disease but not this one with its glossy green foliage. It is untroubled by disease and maintains a good cover of foliage right into the winter. It is a strong grower so needs a bit of room but won’t take over everything.
Bred in the UK by the late Colin Horner who produced many fine roses from his small glasshouse, it is one well worth growing in your garden. 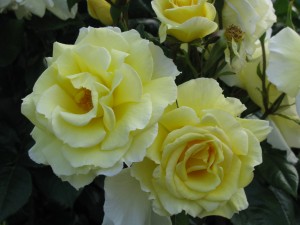