Hand painted roses off something a bit different and attract attention where ever grown. They don’t seem to be as polarising as striped roses and in recent years, hand painted roses have had a comeback.

What is a hand painted rose? Well, the name says it all – it is those varieties that look like an artist has taken to them with a fine paint brush and painted the edges of the petals a different colour.  They are novel and unique.

However, their creation was more down to good luck. Sam McGredy was using the Kordes rose ‘Fruhlingsmorgen’ to breed for hardiness, important in European conditions where he was based at the time, not so much in New Zealand. One seedling had pink blooms with a white band to the petals which Sam brought into his breeding program and further work lead to the first hand painted rose which appropriately  was called ‘Picasso’. It was an early winner in the NZRS Trials in Palmerston North and won awards all over the world.

It also had an interesting story getting permission for the name to be used on a Patent application form. Sam wrote to Picasso’s agent asking for permission which was granted. The Patent Office in the UK turned the application down because it wasn’t signed by Picasso himself. Another letter was sent with a rather short reply with the agent furious that it was felt like he didn’t have legal authority to sign. It was later on Sam discovered that Picasso never signed anything he didn’t legally have to as his autograph was worth a lot of money. The Patent Office eventually accepted the agent’s signature! Sadly, ‘Picasso’ is hard to find in New Zealand now but still grown overseas.

Sam released many other hand painted roses over the rest of his career including the following varieties:

‘Regensberg’ was named after a small village in Switzerland and is a smaller growing, free flowering variety. Good for a smaller garden or planted in a mass planting.

‘Sue Lawley’ was named for a British TV star and is even more novel than ‘Picasso’ with the hand painting more pronounced. It was a winner at the NZRS Trials in 1980 but sadly is no longer seen in NZ.

‘Maestro’ is one of my favourites with unusual red coloured blooms with white flecks around the edges of the petals. It is one of the healthier hand painted roses but again, has largely disappeared in New Zealand.

‘Regensberg’ was named for a village in Switzerland  and is a compact, free flowering grower with blooms of pink and white. Very attractive in full flower but is susceptible to disease. Still available commercially. 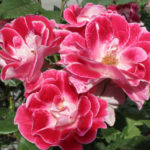 ‘Old Master’ is another favourite with me with carmine red blooms with white centre and reverse. It is very striking in full bloom and always attracts attention. Very healthy but also known to have vicious thorns! Still available.

‘Matangi’ was the first plant variety of any type to be protected under Plant Variety Rights legislation in New Zealand. The orange-red blooms have a silver edge and reverse and are borne in clusters. Still available along with its sister seedling ‘Eyepaint’ has masses of single orange-red blooms with a silver eye and makes a great shrub. 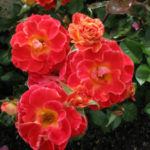 ‘Rock N Roll’ is a tall growing rose with large clusters of orange blooms edged cream with a yellow centre. Very striking in full flower in the garden. Still available.

‘Candella’ is a Hybrid Tea with crimson red blooms with a silver reverse and in cooler weather, the edges of the petals are silver. Quite striking but does have a tendency to droop it’s head when the blooms open up.

In recent years, two newer hand painted varieties have come on the market.

‘The Gallery’ from Keith Zary in the United States has cherry red blooms with a lighter pink, a strong grower and healthy but can be slow to repeat. 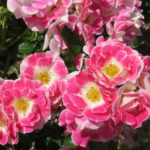 ‘Picotee’ from Rob Somerfield is one of those roses that fits between a patio and floribunda rose. It is very free flowering with pink blooms edged white and also very healthy. Looks great as a short standard in the garden.

Hand painted roses are novel so if you are looking for something a bit different in your garden, consider planting one to attract attention.