You are here: Home / Rose of the Month / December – Red Flame

Red is the most popular colour associated with roses and for December, we feature one of the best new roses to come onto the market.

Red Flame is a new climbing rose that its potential has already been recognised just recently at the New Zealand Rose Society trials in Palmerston North. After a two year period of judging, Red Flame emerged a winner claiming the premier award of the trials, the Gold Star of the South Pacific. The judge’s noses also picked it as the winner of the June Hocking Fragrance Award for the most fragrant rose as well.

The blooms are dusky red in colour and are produced freely during the summer. You will even find a few on longer stems ideal for cutting and bringing inside. Then there is the strong fragrance which the blooms bring to ‘nose level’. All this is topped off with very disease tolerant, glossy dark green foliage that covers the plant. Be aware it can take a year or two to get going so be patient

Bred in France by Michel Adam, it is a rose well worth growing in any garden and one to watch out for in the future. 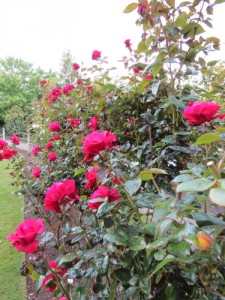