You are here: Home / Rose of the Month / August – Anniversary

While pale pink is a fairly common colour in floribunda’s, this month’s featured rose is one of the better ones in the colour range to be released in the last 20 years.

‘Anniversary’ is a seedling of the popular ‘Sexy Rexy’ and carries many of its attributes, most of all its ability to produce masses of blooms. The porcelain pink blooms come in small and large clusters throughout the season. At times, it is hard to see the dark green glossy foliage that covers the plant.  Excellent disease tolerance completes what is a good all round rose in any garden, either as a bush or standard.

Bred by Bob Matthews, ‘Anniversary was named for the 50th anniversary of Matthews Nurseries Ltd in 1997 and received the Gold Star of the South Pacific in the NZRS trials the same year. One worth growing in any garden. 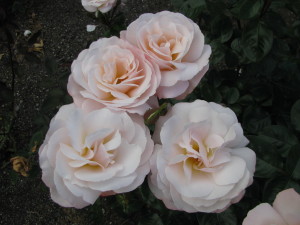