It has been a busy few weeks for those in the world of roses with the main bloom season across much of the country. It certainly has been a challenging season with all the rain, wind and cooler temperatures certainly making life harder for most around the country.

November is the month for rose shows and as I write this, most of the North Island shows are done for another year and the South Island is starting theirs. This years National Spring Rose Show was held in Feilding in the Manawatu, the first time it has been hosted in this town. The local Feilding Rose Society did a magnificent job of hosting this event with the whole town getting in behind. The local rose garden at Kowhai Park was redeveloped for the show with new roses being planted in winter.

Despite the weather, there were many beautiful blooms brought from as far away as Kaitaia and Canterbury for the show which had the theme’ Take time to smell the roses’. The Champion large rose went to Irene Taylor from the 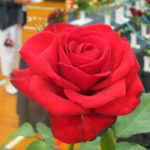 Matamata Rose Society with a small stem of ‘Invincible’ while in the miniature type roses, the champion bloom went to a fully open bloom of ‘Amore’ exhibited by Sheree Gare from the Waikato Rose Society.

Preceding the National Rose Show was the New Zealand Rose of the Year competition the week before which is held at the Rogers Rose Garden, part of the award-winning Hamilton Gardens. Again, the weather played it’s part but the day dawned fine for the VIP judging and presentation of awards.

The big winner this year was the red floribunda ‘Christchurch Remembers’ bred by Rob Somerfield. It won the overall New Zealand Rose of the Year plus Best Floribunda, Best New Zealand Raised Rose while local school children who judged the roses also picked it as their favourite.

‘Sunline’ won best Hybrid Tea for Rob Somerfield as well, this rose was named for the champion racehorse and has blooms of yellow edged pink. The deep red ‘Double Fragrance’ a climbing sport of ‘Deep Secret’ found by Rob Somerfield was voted the most fragrant rose while the purple ‘Indigo Knights’ bred by English breeder Chris Warner won

the Best Climber award. All of these roses are available in garden centres now with the exception of ‘Christchurch Remembers’ which will be widely available in winter 2017 from Mitre 10 and Palmers stores.