You are here: Home / Rose of the Month / October – Hamilton Gardens

This month we feature the very last rose to be released by the late Sam McGredy who passed away on August 25th in Auckland.

Discovered as a naturally occurring sport or mutation of the popular McGredy rose ‘Paddy Stephens’, it shares many of its attributes including fantastic disease tolerance, long stems ideal for picking and well formed blooms. The only difference is the colour which is an appealing blend of apricot, pink and cream. Should be grown in every garden where it will grown to about the same height as ‘Paddy Stephens’, about 1.5m.

In the 10 years it has been on the market, ‘Hamilton Gardens’ has proven to be as a good rose as ‘Paddy Stephens’ and ranks 2nd in Hybrid Teas and 4th on the healthiest variety list for 2019.  It has also become a favourite with exhibitors around New Zealand.

Named after the place where it was discovered, Hamilton Gardens is one of Hamilton’s most popular tourist attractions and is also home to the Rogers Rose Garden which received the Garden of Excellence Award from the World Federation of Rose Societies in 2006.

Hamilton Gardens is also home to the Pacific Rose Bowl Festival and the New Zealand Rose of the Year competition which is being held from November 14th – 17th and will also incorporate the 2019 National Spring Rose Show and Convention ‘The Grande National’ held in the Hamilton Gardens Pavilion. 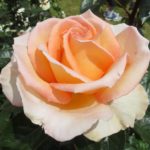