You are here: Home / Rose of the Month / December – Bright as a Button

For this month, we feature a fairly newish rose to New Zealand but one that can trace its origins back some years.

‘Bright as a Button’ is descended from the Persica rose native to the Middle East which has blooms with each petal having a darker base to it giving the impression of an ‘eye’.

In the mid 1970’s, English breeder Jack Harkness began breeding with Persica roses and his first attempts had limited success. In recent years, there has been renewed interest in this line and many rose breeders around the world are actively breeding new roses in this area with larger flowers, better flower production and ‘eye’s in a range of colours

‘Bright as a Button’ is one such result from this breeding work. The pink blooms have a darker centre making for an attractive and eye catching display for this floribunda come shrub rose. It could even be grown as a small climber in ideal conditions. It is never without flowers and is extremely healthy, retaining its foliage right into winter.

Bred in the UK by Chris Warner, ‘Bright as a Button’ won the Nola Simpson Novelty Award and a Certificate of Merit at the NZRS trials in Palmerston North just concluded. One worth growing and keep a look out for other roses coming out from the Persica  line. 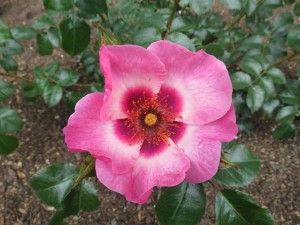