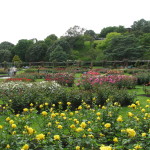 New Zealand has maintained its position as a leader in the rose world with several awards and appointments at the World Rose Convention held in Lyon, France. Three New Zealanders were recognised with awards for their service to the rose. Mr Peter Elliott of Palmerston North was presented with the World Federation of Rose Societies Silver Medal for service to the World Federation of Rose Societies (WFRS). Mr Elliott has served as one of the … END_OF_DOCUMENT_TOKEN_TO_BE_REPLACED