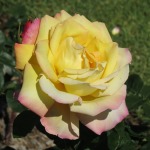 This month we feature one of the world’s most popular rose variety which in 2015, celebrates 70 years since its first introduction to the world. ‘Peace’ is one of the great roses, not only for the story behind it but also for its contribution to the world of roses. In 1935, the late Francis Meilland made the cross between an un-named seedling and the Hybrid Tea ‘Margaret McGredy’ at Antibes, France. Known as 3-35-40, propagation material was … END_OF_DOCUMENT_TOKEN_TO_BE_REPLACED