You are here: Home / Rose of the Month / October – Eyeopener

Groundcover/Shrub roses are nothing new in the world of roses but getting a good one that is in the re shades is not easy. So when one does come along, expect it to be well used in breeding programs around the world.

One such rose is ‘Eyeopener’ which has been used in breeding programs the world over since its release in the mid 1980’s. The growth habit is spreading and mounded, reaching up to 1m high and 1.2m wide and covers itself in masses of single crimson red blooms. A free flowering variety, ‘Eyeopener’ has dark green n foliage which compliments the blooms and is generally trouble free. In the garden, it would look great as a weeping standard rose where the growth can cascade towards the ground. It would also look great on a bank or tumbling over a low wall. It’s best also if it is lightly pruned with only dead wood removed and lightly shaping the bush.

Bred in the Netherlands by Peter Illsink, ‘Eyeopener’ features a complicated parentage bringing in shrub, groundcover and climber genes along with superb health. A Certificate of Merit winner in the NZRS trials in Palmerston North in 1989. A great rose to grow in any garden. 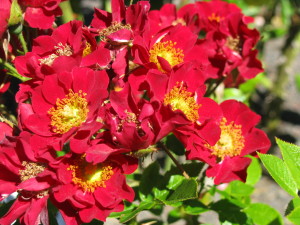