2014 marks 200 years since the very first roses were introduced into New Zealand by the early settlers.

This month we feature one of those first roses which is still grown today. It certainly has stood the test of time!

Slater’s Crimson China  (also known as Rosa chinesis among others) is also probably the oldest known cultivated garden rose with records showing it being grown in the 9th century. In the garden, it forms a small shrubby bush to around one metre high. It can be a bit slow to establish and also tender in colder climates. The bush is trouble free apart from getting some mildew when conditions are right.

The flowers come singly or in small clusters and are crimson to red in colour with a white streak running through the inner petals. As it opens, it changes to pink and darkens in colour.

Discovered in China, it was introduced to the United Kingdom in 1792. One worth growing even as a record to New Zealand’s rose growing history. 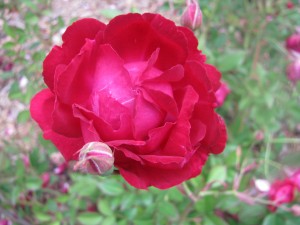